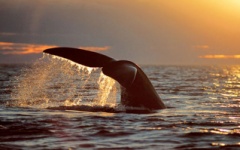 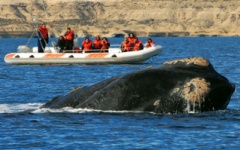 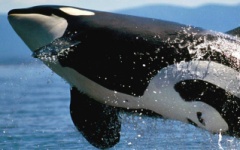 There is only one place in Argentina to really get a good whale experience, and this is around the Peninsular Valdez and the small town of Puerto Madryn. At times in the season it is even possible to wander along the shoreline and have young whale mothers with their calves only twenty feet away in the water! In this section we have endeavoured to run through the main seasons and the main places to stay in the region for the best experience.

When to go whale watching

Generally speaking, the season for the whales starts from the beginning of June and runs through until December, when they start to move off again. Within this period, there are also a couple of distinct periods when they can be better seen from either the Peninsular or from Puerto Madryn….basically, the earlier in the season the more the whales are congregating in the southern most bay of the Peninsular and so are right outside Puerto Madryn. From around September, the whales head around the peninsular to base themselves on the northern bay, and thus it is better to stay in one of the Estancias on the Peninsular.

The main whale species that is seen in the two main bays of the Peninsula is the Southern Right Whale which can grow up to 20 meters in length and can weigh up to 50 tonnes in weight. Of the Baleaena genus, the whales are characterized by the callosities on their heads, broad backs and lack of dorsal fin. In the early part of the season, from June to September in particular, the whales in the bay can be seen breaching and generally showing off their prowess which can be a great sight to see! The other main species that can be seen, predominantly along the Atlantic, eastern coastline of the Peninsula itself, is a resident pod of 25 or so orcas. While not strictly speaking a whale, closer in relation to the dolphin, this pod, in particular, is famed for its ability to slide up the beach in order to hunt the basking seals that come to the Valdes shores in the mating season at the start of August and September.

As mentioned above, in the early part of the season, from June until September, we would normally recommend staying in one of the many properties in the seasonal town of Puerto Madryn. Please see a few of our favourites below: The Territorio Hotel, The Peninsula Valdes Hotel, Solar de la Costa From September onwards we tend to then recommend moving up to stay in one of the properties on the Peninsula Valdes itself as the whales move up to the bay to the north. This being said, it is worth noting that there is more travel time in getting to the Peninsula and so the costs for both the properties and the transport can be higher. Please see a few of our favourite properties below: Estancia Rincon Chico, Faro Punta Delgada

When to go Whale Watching:

The best regions for %1:

We currently have no content for this heading. Please view the other headings for more information.